The limits to the linear economic model

The linear economic model, which can be summarized as "extract-produce-consume-throw away", is structurally condemned because of limits on the planet's stocks of resources .

Failure to adapt our economic models, consumption of non-renewable and renewable resources beyond their capacity to regenerate jeopardizes our ability to ensure "development that meets the needs of the present without compromising the ability of future generations  to meet theirs" (UN World Commission on Environment and Development, 1987. Our Common Future, p.1).

The environmental footprint is an indicator for evaluating man's impact on the entire planet. Over one and a half planet Earths are already consumed every year. In 2050, three planets could be consumed each year due to the increasing population and rising living standards in developing populations. It is essential to adopt an economic model that is more sober in the use of resources .

While man's medium-term survival depends on his ability to integrate more harmoniously into the global ecosystem, resource scarcity is likely to cause major socio-economic damage in the short term.

The structural rise in prices of raw materials

The short-term drop in the price of raw materials should not mask the trend towards an increase in commodity prices. The McKinsey Institute has aggregated the changes in the price of energy, mineral, food and non-food resources in the following graph 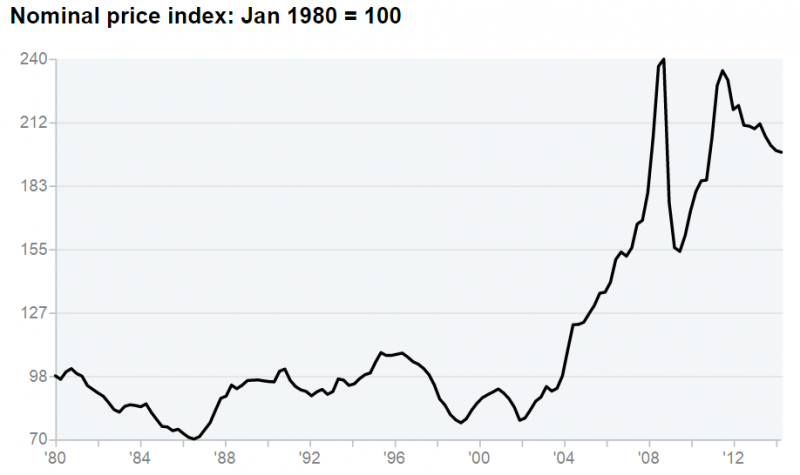 The current drop in commodity prices is closely correlated to the decrease in crude oil prices and the slowdown in Chinese growth. OPEC's aggressive competitive policy with regard to US shale oil will soon end and commodity prices will rise once more. The scarcity of easily accessible resources and the rise in global demand in 2050 will maintain this structural rise in the price of resources. Business models dependent on consistent supplies of raw materials will be seriously affected if they do not adapt to this new situation.

The Earth was long thought to be an inexhaustible source of materials. Today, it is clear that we are exhausting all its stocks. The reserves of rare and essential elements such as indium and strontium are virtually down to zero. Other equally problematic shortages could quickly involve much more common elements such as copper, zinc or lead. 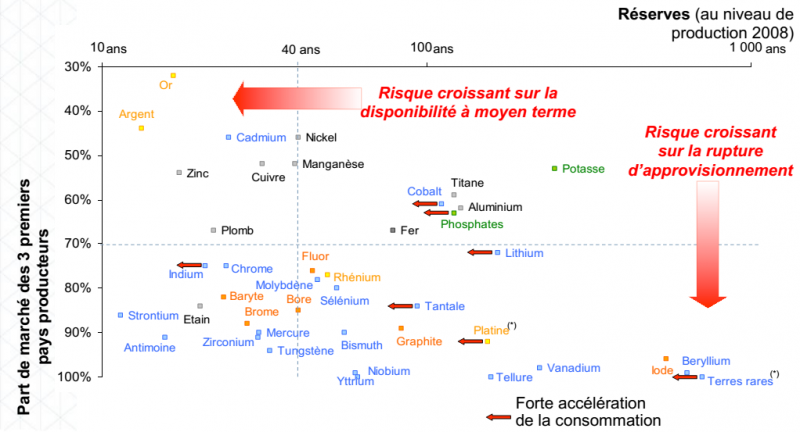 Illustration 5: Risks related to the procurement of raw materials (Source: USGS in ADEME, 2014)

Another equally important problem concerns the location of existing reserves. The extraction of rare earths is almost exclusively concentrated in China. Half of the oil reserves are located in the Middle East. Importing regions are highly dependent and are exposed to major supply risks, which may cause increased geopolitical tensions.

Resilience of companies, regions and states involves adopting models that are more sobre in the way that they use resources. This transition is compromised by the short-term decline in prices of raw materials. Public and private stakeholders should adopt strategic visions for the medium term and get away from the immediate imperatives of the market, at the risk of not adapting to the new economic imperatives of the twenty-first century. The authorities should provide incentives and support for the circular economy to make it easier to disconnect economic growth from resource consumption.