Selling use, not the product! Going a little deeper into this simplified slogan the functional economy is an economic model based on the development of solutions that combine service guarantees and the functions of use of material goods belonging to the producer.

For example, solutions may involve:

Economic exchange is no longer based on the transfer of ownership of goods, which remain the property of the producer throughout their life cycle, but on users consenting to pay for value-in-use (or to contractualize performance-in-use). (See the Textifloor and Eco-mouton initiatives)

The functional economy is one of the seven pillars of the circular economy and is part of the impetus of the environment conference and the law on the energy transition to green growth.

Since the concept appeared as the "service economy" in the 1980s, the academic world took hold of this concept to give it various definitions, and related concepts have also emerged, such as "product-service system" the "quaternary economy," the "economy of useful effects," to name but a few. It is clear that there is no common understanding of the functional economy model.

For the people involved to be able to appropriate the concept and make it more operational, ADEME (the French Agency for the environment and energy control ) decided to develop a shared and agreed prospective vision of what the functional economy might be in the medium- and long-term. To do this it asked the laboratory Atemis to carry out this prospective study and identify from a field of possible options factors that are favourable or otherwise to its development.

This initiative, which will continue until June 2016, is being conducted with the clubs Cap EF, CLEF and Noah together with ObSoCo and will result in proposals for strategic courses of action.

For the Ellen MacArthur Foundation, the move to a functional economy is one of the ways for a transition towards a circular economy. What if, instead of buying the products we use, we were buying the service they provide us with? And what if we decided to promote efficiency instead of ownership?

This short animated film from the Ellen MacArthur Foundation introduces these concepts and describes how this model might work for companies as well as for individuals. 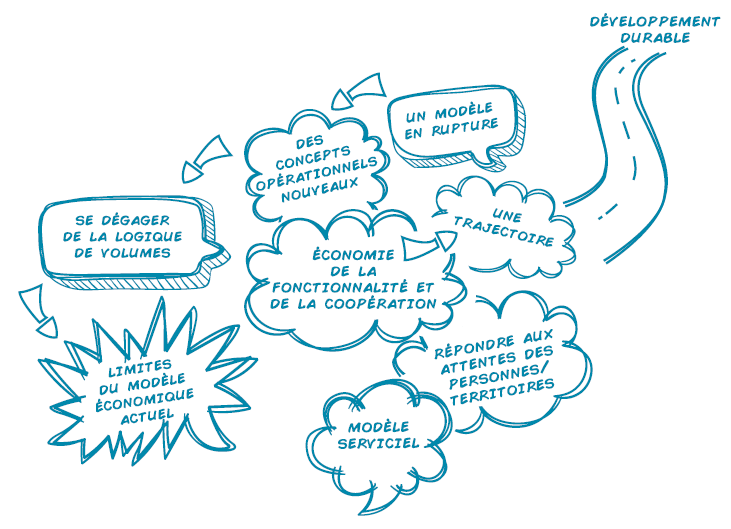 The creation of the IE-EFC as an association in October 2014, was the result of impetus emerging in certain areas since 2010 based around the Club Economie de la Fonctionnalité & Développement Durable (functional economy and sustainable development club) formed in January 2007. The mission of the IE-EFC is to develop and facilitate a community of thought and action working on functional economy and cooperation issues in the context of sustainable development at European level.

The institute has developed a data repository and a support system based around the functional and cooperation economy, which are based on four main pillars:

Its aim is to be an educational resource centre on the functional and cooperation economy. The CREPE project partnership consists of research and intervention structures in Europe: Atemis France, Fondazione Giacomo Brodolini, Italy, specialized consulting firms and consulting firms on issues of sustainable development Ecores - Belgium, CIRC and Dinamia Spain. All partners work with companies and regions to improve their economic, social and environmental performance. An explanatory note on SCF was published as part of this programme:

To learn more about this programme: http://www.crepe-efc.com/

Clubs and collective actions in the regions

The first Parisian club (Club EF & DD) opened up prospects in 2007, but did not have any local roots. Under the impetus of the debates undertaken, the regions gradually took action: the first collective actions emerged as of 2010 in the Nord pas de Calais and Rhône-Alpes regions and they are multiplying today. In continuation of these actions, several regional clubs have emerged and continue to appear.

Formed in January 2007 by Atemis, the Club EF & DD has over the years become the main French debate forum for the functional and cooperation economy in terms of sustainable development issues. In late 2015, with the proliferation of actions and regional clubs, Club EF & DD began its transformation to become Agora de l'IE-EFC The first steps planned include shared control with regional Clubs, broadcasting sessions to allow remote participation, creating a digital information letter and including minutes and resources in a new site.

In 2013-2014, with support from the Rhône-Alpes Region, CIRIDD conducted a pilot scheme. It involved experimenting on methodology for supporting the move towards a functional economy (NOVUS) with five SMEs in the region. Based on this successful experiment, CIRIDD launched collective action called Rhône-Alpes Essaimer L’Innovation par l’économie de fonctionnalité (Rhône-Alpes swarming: innovation through the functional economy - ReliEF) with support from ADEME, the Rhône-Alpes region and Europe (ERDF). It aims to assist 12 companies in the region with an enhanced version of the methodology. Interested companies should contact CIRIDD quickly.

See the presentation of this initiative on Eclaira

Collective action is in preparation for companies located in the Auvergne region. Contact: Véronique Guiraud, MACEO 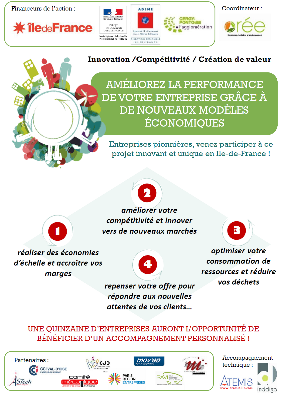 The pilot project, initiated and funded by the Regional Council of Ile-de-France as part of the Plan Industries (Industries Plan), with support from ADEME Ile-de-France and DRIEE Ile-de-France, aims to implement an innovative approach combining industrial and territorial ecology and the functional economy in an area within the Paris region. ORÉE, the project coordinator, together with its partners, chose the Cergy-Pontoise Urban Community as an experimental territory. This operation benefits from technical support from consultants ATEMIS and INDDIGO. Companies in the area have the opportunity to get involved in either an inter-company (industrial and territorial ecology) or in-company (functional economy) approach, or even combine the benefits of both approaches. The findings of the industrial ecology diagnosis will enrich the service-based offers that companies will propose following their functional economy efforts.

With support from ADEME and the PACA region, the Inspire institute is leading the CQEFDproject, a multi-participant action plan, to promote the emergence of the functional economy. More broadly, it is likely to encourage the development of practices within the scope of the collaborative economy (sharing and pooling) and to accelerate the transition towards a circular economy. (See the La Marcotte initiative) 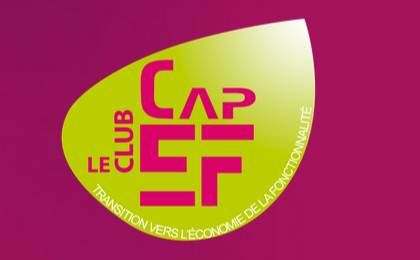 The creation of the Cap EF club in October 2014 followed a collective action supporting 11 companies in their move towards the functional and cooperation economy initiated and driven by the Club des Entrepreneurs du Pays de Grasse (Grasse region entrepreneurs' club) with support from the Conseil Régional PACA (PACA Regional Council) and ADEME PACA. Club Cap EF brings together company directors, and people involved in the economic and public spheres who are building the sustainable economy of tomorrow in the French departments of Alpes-Maritimes and Var. The Club provides support for companies and regions in their transition to the functional and cooperation economy. Club Cap EF now offers a new light-weight version of its support facility, as well as the full version.

Vaucluse: A collective support service for12 companies is in preparation.

Recruitment is under way. For information and to sign up: charles@ieefc.eu

CERDD initiated an experimental support initiative for regions moving towards a sustainable development model based on the EFC data repository. This initiative, supported by the Nord-Pas de Calais region and the state, is providing one-year support for: the Urban Community of Dunkirk, the Sud Artois inter-communal authority and the La porte du Hainaut urban community.

The INNé club brings together companies and people in the Normandy area concerned to do business differently by means of the functional economy, an important component of the circular economy. Free meetings open to all are organized by the club to promote the emergence of collaborative projects around this sustainable,efficient economic model. As a place for swapping, sharing, debating and thinking, the INNé club aims to develop the impetus of the service economy within the region

A collective service led by CJD, created jointly with the Chamber of Commerce and IE-EFC, and with backing from the Regional Council and ADEME, will begin in November 2015. Participating companies, members of the CJD, have just been selected.

The constituent assembly of the Club Wallon for the functional and cooperation economy will be held on November 16, 2015.

The opening session is scheduled for January 2016 (date to be released soon). A collective support service for 16 companies is in preparation, with support from the Walloon Region.